As a young man, Aran Morris 1918-2009, worked with his father, Thomas Rowley Morris, at the small grocery shop fronting Belair house. T. R. Morris had been in the Merchant Navy as well as serving in the R.N.V.R. on minesweepers in World War One. Only one of Aran’s uncles pursued   a seafaring career and that was Douglas who for a time was a steward and then became a professional golfer, his other brother George became a vicar. Thomas’ father had been a tanner at Factory forge on the banks of the Lerry River, between Dolybont and Talybont.

Aran attended Ardwyn Grammar School and decided after leaving school that he would take up engineering and went to Birmingham to work. At this time, the war clouds were gathering and it was an unsettling time and he hated the confining nature of his job and told his father that he was coming back to Borth. His father suggested he take over the shop and the premises. For a time Aran was involved in local coastguard work in the Borth area. Approaching twenty years of age with a war about to commence, he decided to volunteer and chose the Royal Navy as he thought the army was too risky and so was the air force. His initial training was at Skegness, which he remembered as a cold icy place where conditions that winter were so bad that one of the trainees died in his bed.

His introduction to the “proper” war was quite a shock for him. He was put on a train down to Ramsgate where he joined a large group of naval men sleeping on the dance floor of a very large hotel. He was rudely awakened at 5.am. and he and three others were placed on a 25 foot pleasure boat called the Barnham Nostrum, skippered by its civilian owner. He was not sure quite what was going on and as he recalls when they passed the Goodwin buoys, often mentioned by his seafaring father, the thought struck him that he was a long way from land. When a pall of smoke was seen on the horizon, the reality of the mission to evacuate the troops at Dunkirk came home to him. At first he took the low flying aircraft as being a protective R.A.F. but he was told in no uncertain terms that they were German planes… and soon whistling bombs were landing everywhere. They picked up a dozen men and hastened back to Ramsgate on this the last day of the evacuation. He laughingly recalls trying to shoot down the planes with a rifle, instructed to allow them a good lead as if they were on a pheasant shoot.

After this he joined H.M.S. Columbo, which was an epic itself. He and other crew-members were shipped out to Capetown and then journeyed by train to Durban, which took 3 days; needless to say it was drunk dry on the first day. He saw quite a bit of South East Africa on this journey. He recalls that in Bloemfontain he saw a magnificent train and carriages and approaching a rather well dressed group he enquired about this wonderful piece of machinery. In reply one of the men introduced himself as a minister. Naively Aran said, “So is my uncle George“. Aran of course thought he was referring to a religious figure….it was in fact a political minister. Aran arrived in Mombassa on the Kadine Ismail to join H.M.S. Columbo.

He then went on an exotic tour of the Indian Ocean, visiting Mogadishu and the Maldives. During this tropical voyage comfort parcels from home arrived full of inappropriate scarves, mufflers and balaclavas! Back in Plymouth he joined the H.M.S. Onslaught, which in its final stages of being built, was, as Aran recalls, subject of sabotage as wooden rivets had replaced metal ones around the funnel. His recent idyll was soon to change into real war as he spent the majority of his service days on the Russian convoys.

The commander was Joe Selby from Gloucester, who continually won the first prize for telling the filthiest stories on board ship. As Aran recalls, “if I had been cold before at Skegness; it was tropical compared to the atrocious weather on voyages to Russia as sub-zero temperatures and gale force winds continued unabated. Our decks were covered with snow and ice, and of course the danger of bombers and submarines was constant. The crew was advised not to wash as the natural body oils would help against the cold, especially when they had to go on deck and axe off the ice from the armaments. There were to be no hammocks used as they were a fire hazard….we were on constant alert, so we had to sleep where we could and at times this meant sharing sleeping quarters with dead bodies, both German and British”. As the official history of the Arctic convoys show, there were terrible losses; three quarters of one convoy were lost in less than half an hour. On one momentous occasion the German battleship Ulm was sunk and the H.M.S. Onslaught took aboard the survivors. Mess tables were being used to perform surgery, and on one memorable occasion another Welsh rating, holding an amputated arm, enquired what he should do with it. The immediate reply was “throw it over board”. Many surgical procedures were performed without anaesthetic.

With all the lives lost and the outstanding courage displayed one would have expected a rapturous welcome by the Russians; however, this was not to be. Aran recalls that part of their cargo included a complete field operating theatre and trained staff to go with it. Although it was given freely it was point blankly refused as the Russians thought that the medical staffs were spies. The docks at Murmansk were piled high with supplies yet the convoy crew’s rations were miniscule. All in all Russia was hardly a welcoming place. Being on the convoys for over two years meant that at times it was continual night, and as Aran recalls “at other times you could read comics at midnight”.

On a lighter note he remembers being in the chart room off the coast of Norway when the captain pointed to where they were and remarked that it was excellent fishing ground. In fact he decided to drop a depth charge. To save time and trouble with an explanation he just gave the standard order. Of course the crew thought that there was a submarine in the vicinity and everybody  was on high alert. The depth charge detonated, and as Aran recalls “I have never seen so many dead fish in my life. We came to a halt and spent the next hour or so hauling in as many fish as we could. It was a welcome addition to the diet, but after four or five days the novelty wore off. I am sure the Admiralty would not have approved of such an event in the middle of warfare”

After the Russian convoys, H.M.S. Onslaught became involved with the Normandy landings. Aran remembers that the conditions were so bad with many of the invasion forces being shot to pieces, that the thought crossed his mind that his luck would run out, so he ate four bars of chocolate that he had been saving up thinking it would be his last meal. Instead he was sick for two days… which probably helped take his mind off things. Even though the Onslaught was hit a number of times, there were no casualties. 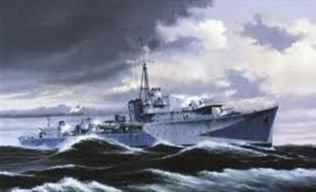 As his duties had seen him involved with signals and assisting with navigation it was suggested that with his seagoing experience he might apply for a commission and stay on for a naval career. He refused this and left the ship at Portsmouth. The next thing he found that he was on the H.M.S. Black Swan, which was sent to another theatre of the war in the Pacific.  By the time he got there the atom bomb had been dropped and Japan had surrendered. Most of the time was spent going round the Pacific repatriating Japanese units, many of whom had not realised the war was over.

Aran once got into hot water when he and a few mates were invited to go to a jazz session on the depot ship H.M.S. Tyne. Unfortunately by the time they got there she had left and it was then that Aran realised that the chart house keys were in his pocket. So there was a mad dash back to the Black Swan, where a hue and cry was taking place. The ship had received sailing orders, but could not proceed, as there was no access to the chart room. Aran realised he was potentially in serious trouble so swore that he had been on board the whole of the time, and that the keys to the chartroom had been in his safe possession. Much to his relief, this was eventually accepted. He returned to Plymouth to be discharged, and dressed up in his “demob” suit returned home to run the family business, where until the time of writing he has unfailingly served the Borth community in many capacities. He was instrumental in bringing the lifeboat to Borth, as was Gethin Evans. Recently Aran has been awarded an M.B.E., a long overdue recognition of his services to the community.