Edward John Jones 1878-1945, was the son of John Jones mariner and Jane, a laundress of Wellington Place. After his mother died he went to live at Penmount House with his aunt Jane Thomas, his father’s sister. Edward worked his way quickly up the ranks and in 1907, by the age of twenty-nine, had gained his masters certificate. He featured like Edward Lewis Lloyd, in a sea tragedy in 1914, a year on from the Volturno saga.

Just prior to the outbreak of World War One, E. J. Jones was First Officer on the liner Empress of Ireland, owned by the Canadian Pacific Railways. What was to unfold was a tragedy that equalled that of the Titanic sinking. The liner was in collision with the Norwegian collier Storstad in the mouth of the St. Lawrence River. The ships had first sighted each other about ten miles apart on a calm, clear night. Adjustments were made by the captains of both vessels to ensure a safe passing. A sudden dense fog descended that caused both captains to err on the side of caution, which ironically contributed to the disaster. The captain of the Empress of Ireland, Henry Kendall, slowed the ship down to a crawl waiting for the other vessel to pass before getting underway properly.  Instead of passing, the Storstad’s masthead lights materialized out of the fog heading straight toward the liner. Despite taking immediate evasive action, it was too late. As the Storstad was low in the water with a full cargo, and had bows especially strengthened to tackle ice that was often a hazard in the St Lawrence waterway, she cut a massive hole 25 feet long and 14 feet wide, straight into the starboard side of the Empress of Ireland. 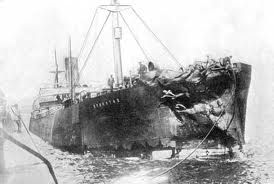 What followed was not helped by the fact that it was night, and most of those on the liner were asleep. Although having enough lifeboats for passengers and crew, the ship sank so swiftly that they could not be fully utilized. Only six boats were successfully launched, as after ten minutes, the liner lurched onto her side with many passengers clinging for a foothold on the slippery hull. Four minutes later she sank. The death toll was enormous, of the 1,477 souls on board, 1,012 lost their lives, including 840 passengers.  In total, eight more had died than when the Titanic had sunk A. J. Jones was instrumental in ensuring that as many as possible of the lifeboats got away, and desperately sought to save as many survivors as possible.

Toward the end of the Great War, he was in command of the S.S. Medora, when she was torpedoed off the coast of Ireland; this was another Canadian Pacific Railways ship. After the crew had taken to the lifeboats, the submarine surfaced, and in perfect English, the officer on its deck demanded that the captain, chief wireless officer and the chief gunner should be delivered to him. At first, they denied that they were aboard, but the German captain threatened to sink them on the spot if they were not delivered. Captain E. J. Jones stood up and identified himself, as he did not want to endanger the crew. The wireless operator followed suit and a brave second gunner grabbed the chief gunner’s hat and stood up, as he knew that the chief gunner was a married man with children. After being taken aboard the submarine, it commenced firing again, until the Medora sunk.

Shortly after this incident, another ship reported that she had destroyed a German submarine in the area, and there was a great fear that the Medora prisoners had gone down with that submarine. However, soon after the British were notified that the three were safely landed and were in a prison camp. Captain Jones survived his ordeal and returned to work for the Canadian company. He was captain of the Empress of Australia in 1941. He was awarded an O.B.E. for services during the Second World War.  He retired from the sea in 1942, and died three years later. 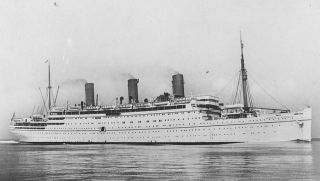