The Edwards clan of seamen produced half a dozen master mariners, primarily in the 19th century. Edward Edwards 1822-86, who became captain in 1865, took over command of the barque Walton on which he had previously served as mate. From 1874, and for the next eight years, he was in command of the barque Eurydice. He was captain of another barque the Robert Kerr on which he died after serving two years. Captain Edwards carried many migrants to Canada. Thomas Edwards 1846-99, passed as captain in 1880 after serving as mate on the Fairy Queen. There is no record to date of vessels that he may have commanded; but he served as first mate on the Mirella in 1887 and later the Celtic Chief  a vessel on which he died. Richard Edwards of Glanwern 1851-1910, gained his captaincy at the tender age of twenty-one, and commanded the sailing vessels Convoy, Florence and the large barque Holt Hill. John Edwards b.1875 became a captain in 1904. In a forty year career at sea he commanded the Graffoe, Carronpark, Hazelpark, Wellpark and Beechpark. 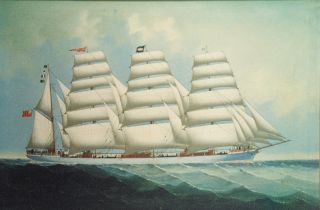 Another John Edwards b.1887 also had a long seafaring career working his way up the ranks, where by 1912 he was second mate, then first mate in 1916 and a year later master. He was known locally as Captain Edwards Penybont. He was master of the S.S. Stanwell for two years until she had to be abandoned in a sinking condition with no casualties in 1934. This small 425 ton vessel had run into a fierce gale whilst carrying a cargo of coal from Barry Dock to Figuiera Da Foy in Portugal. His chief officer at the time was fifty-eight year old Borth man John Taylor. Unfortunately John Edwards lost the Plas Dinam in the same year off the coast of Newfoundland, again with another Borth man Rowland Ellis amongst the crew. This vessel was built in 1919 in Belgium and was laid down as the Ondarran but completed as the S.S. Zeelander. In 1923 she was purchased by James Davies of Cardigan and renamed S.S. Plas Dinam. Captain Edwards was in command of the steamer Nicolaos Baekas in the 1930‘s, but did not survive the decade as he was killed during his involvement in the Spanish Civil War. He was employed as an international observer on the S.S. Brisbane when she was straffed and bombed by Franco's planes. Although bought ashore he died of his wounds.

John Ivor Edwards b.1903, became master in 1930 at twenty-seven years of age. He had some narrow escapes during the Second World War when the Mountpark was sunk by enemy gunfire in 1940. Later after commanding the Grangepark his next vessel Ocean Freedom was bombed in port. He was highly commended for war services and for a time continued at sea after hostilities commanding the Hollypark. This vessel was in collision with another ship in dense fog near the South Goodwin Lightship in 1947. There is little more known about the Edwards mariners at this time.