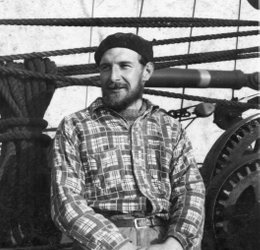 Hugh David Hughes 1929-2006,  lived at Boston House, and was known to everyone as “Hugh Boston”. Neighbour John Matthews remembers Hugh bringing him American comics every time he came home on leave. They were rare and welcome items for a young boy in the 1940’s. Hugh was from a family of seafarers who were related to many other Borth families; his grandfather, David Hughes, had captained the S.S. Eira and relatives were often crewmembers; some of whom lost their lives when that ship disappeared on a voyage to Kronstadt in 1898. Hugh’s character is summed up in the following extract from a reference given prior to his going to sea…“Seventeen years of age, good education, tall and of a smart appearance. He is honest, trustworthy and of an excellent character that is beyond reproach. Very nice young man and good natured…”.

Hugh’s early years were somewhat blighted as he had tuberculosis, which meant that he spent two years convalescing away from home at Llandrindod Wells at a sanitorium grandly named Highland Moors. He recalled listening to the news about the sinking of the Graf Spee. He passed his examinations and entered Ardwyn Grammar School, but missed the first two years because of his illness. As he had kept up his studies he started his secondary school career in year 3.

At sea, he began life like many of his antecedents, by working his way up the promotion ladder from being a deck hand. He was an A.B. by 1953 and by 1955 he had obtained his second mates certificate. Hugh served on the Angelo of Hull, Seaboard Enterprise of Barry and the great ocean liner Queen Elizabeth. He was third mate on the latter vessel, voyaging to Canada and Australia. On one of his voyages to the Antipodes, a block broke loose and fell just as Hugh was passing. He suffered a severe head injury, which resulted in him being hospitalized for two months in Australia. 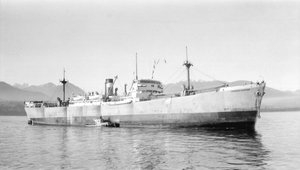 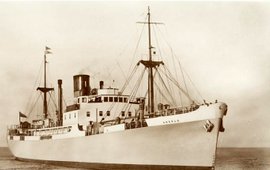 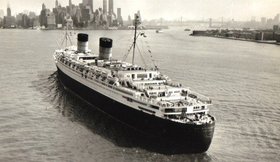 It was so difficult for him to find a ship to return on, that he seriously thought of taking out citizenship, not only because he liked the country, but that he could get a position on an Australian ship to get back home. Luckily he found a ship and came back to the U.K. and his last years at sea were again on the Queen Elizabeth, which he enjoyed immensely.

During one trip crossing the North Atlantic in winter on a gloomy overcast day, he arrived on the bridge where it became evident that something unusual was afoot. The knowing demeanour of the other officers, and a strange aura of silence and stillness seemed to have descended upon the ship. Hugh eventually broke the silence asking what was up, and was there anything wrong? They all pointed to the starboard side, Hugh looked at the dark sea and the light coloured sky above it. Suddenly he looked again and realized that the sky was actually a mountainous iceberg. As he said “it was both beautiful and sinister, especially for a seafarer”.

Hugh crossed the Atlantic many times and became quite familiar with New York. Being generous to a fault, like his father, D.H. Hughes,  before him, he always bought presents back, scent for his mother and sister, and comics and magazines for neighbouring youngsters. Hugh’s father, David “Boston”, who had been a stretcher bearer in World War One, almost single-handedly bankrupted Boston Stores as he would freely give credit. For years he would load his pockets with sweets which he surreptitiously handed out to all in Soar Chapel on Sunday nights. The constant rustling of sweet wrappers so annoyed visiting preachers and the chapel elders, that it was bought to a halt with the threat of expulsion for David.

Unfortunately, a stomach infection meant Hugh had to leave the sea as he knew from past experience that it could be risky to fall ill on board ship. By 1958 he was ashore and a member of the Aberystwyth Fire Brigade. There he met his wife Verona, and they settled down to live in Aberystwyth. He was involved with many activities to do with young people, and despite advancing years and ill health; he still refereed local football matches. As his wife Verona recalls, even in his last days when he was in hospital, he insisted that she fill in his referee registration forms for the following year.