The Hughes clan was involved with maritime affairs for over three centuries, and disentangling them is nigh impossible. The following are notes on some of them.

Captain Hugh Hughes b.1827 commanded the sloop Dart from 1857 until 1860, the sloop Bee from 1870 to 1872, the schooners Martha James 1872 to 1874, Lady Zetland 1875 to 1877, Agenoria 1881 to 1883 and the Clara Felicia from 1884 to 1886. He amassed quite a property portfolio, owning and at one time living in Gwendon, and later resided for a time at Tynparc in Llandre. He owned the three cottages built around 1700 to the south of the Railway Inn at Borth, which he left to his daughters. The centre one, Hendre, was where one of his last descendants, a granddaughter, lived. His older brother, Captain John Hughes, was born in 1823, and lived at Llandre, and captained the schooners Capricorn and the Jane. The Hughes clans produced fifty or so seafarers, with over twenty master mariners and were primarily active in the 19th century. 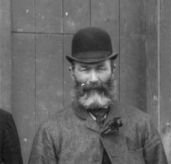 David Hughes b.1825, was master of the 99-ton brigantine Malvina. Another David Hughes b.1841, became a captain in 1865, and commanded the local sailing vessels Mary Anne, Ivanhoe and, for a decade, the 663-ton barque Caroline Spooner. Evan Hughes b.1849, was captain of the barques Hannah, Hugh Ewing and the Spirit of the South. He died on the latter vessel leaving a widow Mary Jane Hughes who lived at Everton House; who later married Captain David Williams 1849-1910.

Captain David Hughes 1865-1903, was at sea  at the age of 12 on the sailing vessels Cambrian, Naomi and the Dorothy. In 1880 he was on larger sailing vessels  such as the Jane Maria, Ocean Belle, Eleanor and Jane, Caroline Spooner, Rhuddlan Castle and the Rose Hill. David continued in sail on the Snowden and the barque Crusader. In December 1895 he passed his masters exam in Liverpool and went on to command  steamers including the  Bernina, Glan Rheidol   and the Glanayron, and then he was back on sailing ships such as the barque General Nott and the City of Carlisle. Most of the vessels listed to date had Borth connections.

In 1903 he died when the S.S. Mexicano, on which he was serving as First Officer, was lost off Cape Hatteras South Carolina. The vessel was caught in a hurricane carrying a cargo of petroleum products, despite jettisoning gallons of oil the huge seas smashed the lifeboats and sank the ship. There were only seven survivors out of twenty-two. David left a widow, Mary Jane Hughes nee Bywater, and two daughters Jane Lillian and Gesina Margherita. In 1905 Mary Jane  married Hugh James who was born at sea in 1880 and died  at sea in  1918 and they had four children together. The Bywaters are profiled elsewhere on this site. 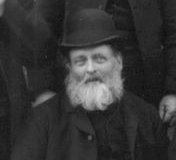 There were four John Hughes’; one born in 1808, who was captain of the Aberystwyth, another born in 1823 captained the schooner Jane of Aberystwyth. A John Hughes born in 1834, drowned at sea whilst captain of the Jane Maria on a voyage from Vera Cruz to London,and a fourth John, born in 1836 owned and commanded the local schooner Lorne for over a quarter of a century. Disentangling the relationships of the Hughes families of Borth is almost impossible. Suffice to say that they and the James’ crop up everywhere, marrying into other seafaring families such as the Daniels, Ellis’, Williams’ and Jones’. 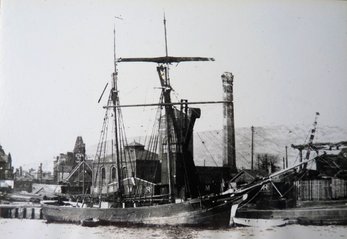