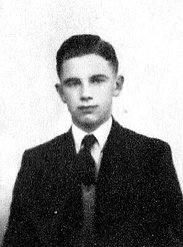 Raymond Hughes, the son of Richard David and Elizabeth Hughes, had a bright future ahead of him. He attended Towyn School as a boarder, but as soon as he was sixteen he was off to sea. He was from seafaring family where one of his father’s brothers William, jumped ship in 1912 and lived all his life in New Zealand. Yet Raymond’s father, very much against family tradition, joined the army. He was initially in a Scottish regiment, and then joined the Royal Horse Artillery, where apparently he was on the leading gun carriage that entered Jerusalem after the Turks were driven out of Palestine in the First World War. As village lore put it “he was one of the first Christians to enter that city since the last crusade”.

Raymond, in his first year as deck boy, went on three voyages, two on the Dallas City and on his last fatal voyage, the S.S. Bradfyne. On the latter ship Evan William Lewis was the bosun, he was married to Raymond’s Auntie Mary, so it was natural that Raymond would join his uncle. In November of 1940 the Bradfyne, a Reardon Smith Line vessel, was sunk by the German submarine U100, south of Rockall. The two Borth men and thirty-six others lost their lives… only four men survived. By a strange quirk Raymond’s previous vessel the Dallas City, was bombed and sunk by German planes in the same year. Raymond was only sixteen at the time, and his Uncle Evan forty-six. Evan had already lost his brother to a German U-boat twenty-two years earlier.

Raymond’s sister Eileen remembers the fateful day when the telegram arrived. All she recalls was an ominous silence that had descended on the house, and unexpectedly being taken by the postman back to his family where she spent the day. Other than the one remaining photograph, she cannot remember her brother as she was only three at the time. Eileen often ponders over this tragedy and how stoic her parents must have been, as her father suffered from shell shock, the outcome of his service in the First World War. Eileen is married to John Davies, a descendant of the Fforsygravel mariners and those of Llanon.