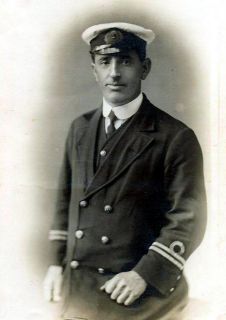 David was at sea for over 40 years, going through World War One unscathed. His career began in 1898 when he was 15 years old. 10 years later he was an Able Seaman and served in that capacity on the steamships Dahomey, Ebony, Cowrie, Conche and the Annie Hough. By 1911 David was a bosun on the S.S. Craigmore and at the end of that year passed his 2nd Mate's examination at Barry. 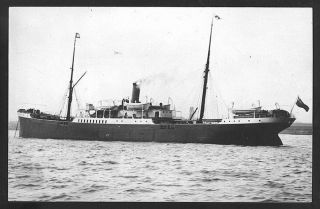 From 1912 to 1940 he served as Second Officer on many ships including the Baron Ardrossan, Canford Chine, Carthusian, Dumfries, Turcoman, Stancroft and Llanishan. The Stancroft was a blockade runner during the Spanish Civil War, and as David remarked she had no wireless facility, so if anything was to go wrong then they were on their own. At one time after discharging a cargo of coal at Santander this vessel took on board 2000 refugees for transportation to Nantes in France. They had hardly got under way when one of Franco's warships, the Admiral Cervantes, stopped the vessel and despite knowing that there were refugees on board, inexplicably, and to the crews relief, allowed the Stancroft to proceed. On one occasion whilst ashore in Barcelona David was caught in a bombardment resulting in the city's lights going out making it very dangerous and difficult finding his way back to the ship. In another incident in Valencia there was an air-raid and a bomb dropped 50 yards form the Stancroft shaking the ship from stem to stern like a toy. This was a very narrow miss but a nearby Greek vessel was hit with the loss of 8 lives. By the end of 1937 David was happy to end his involvement in the Spanish Civil War. His next ship the Llanishan, ran timber from Archangel to Cape Town where the newspaper, the Cape Times, featured a story on David and his experiences in Spain. After retiring from sea he took up stone engraving. 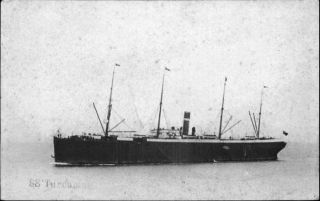 David died in 1962. In that same year his widow received an intriguing letter from The Mercantile Marine Service Association, whose General Secretary Leslie Harrison was conducting a search for information from those who had served on the Baron Ardrossan at the time of the sinking of the Titanic. Neither David's widow or son could recall him mentioning anything concerning this matter, however that does not mean that he did not have pertinent information. To illustrate the nature of the inquiry Harrison enclosed a copy of a letter that had already been sent to other officers serving on the Baron Ardrossan, including a Mr Ogilvy. All this was to do with the attempt to exonerate Captain Stanley Lord of the liner Californian who, according to the subsequent Titanic disaster inquiry, was close enough to have rescued many people had he acted with any sense of urgency. Lord always maintained that an unknown ship some five miles away directly between his vessel and the Titanic, had, like the Californian, stopped because of the ice field. Despite numerous attempts at communication with this ship there was no response and subsequently the unknown vessel sailed away. Flares had been seen and everyone on the Californian assumed they were from the mystery vessel, when in fact they could have been from the Titanic some 20 miles away directly beyond the mystery ship. 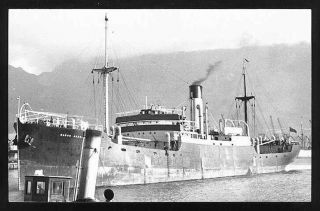 Below is a copy of the letter sent to Ogilvy and others outlining the reasons for exonerating Captain Lord. David's grandchildren have kept all the relevant correspondence. 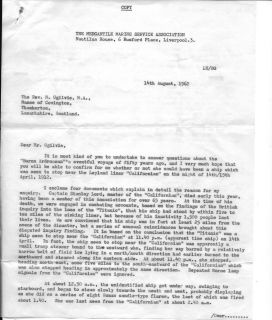 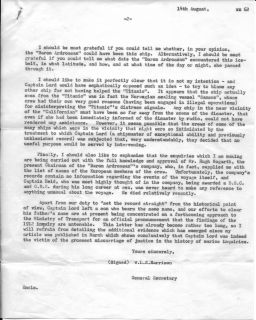 If David knew anything, it went with him to his grave. Currently it is difficult to track down the eventual results of this inquiry as the Mercantile Marine Association has ceased to be. Certainly Captain Baird of the Baron Ardrossan provided no information to the original inquiry. We do not know what Ogilvy's reply was, so one wonders if the mystery ship that purportedly hoved to because of the ice pack some few miles from the Californian, was the Baron Ardrossan or not. 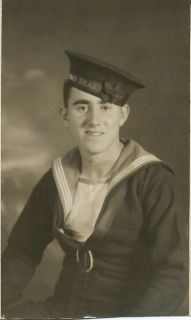 David and Mary had one child, John Iorwerth Jenkins, known locally as Eddie. He was born in 1923 and after leaving “Top School” he completed a painting and decorating apprenticeship. He was in the Home Guard at sixteen years of age and a year later he joined the Royal Navy serving throughout World War Two. He was on His Majesty's Ships Raleigh, Drake, Quebec, Copra, Royal Rupert and Royal Katherine. He voyaged in the Mediterranean and as his children, John, Paula and Sandra recall he exhorted them to visit Italy, especially the Bay of Naples which he thought was the most beautiful place he had ever been to. Although reticent to talk about his war experiences, his son John recalls his father describing the horrors he witnessed during the landings at Sicily. Whilst under constant bombardment Eddie had the unpleasant task of recovering bodies when a nearby hospital ship was blown up. During this task he was wounded in the leg by a piece of shrapnel. Two hours later with the wound stitched up he was back recovering bodies again. Despite all this he retained his well known cheery cheeky persona.

I remember him as a very popular personality in the village who famously caused the Reverend Carron Jones to wobble on his bike and end up in a ditch. The elderly Methodist was cycling along near Glanwern when he spotted Eddie, recently home from sea, and asked him in Welsh “how were things in the Navy”? Much to the preacher's shock and consternation young Eddie replied “plenty of women and beer”. 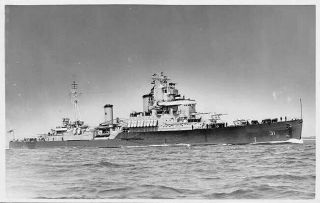 According to his children Eddie then followed in his father's footsteps and joined the Merchant Navy for 3 years. After returning home to Borth, he again took up painting and decorating and worked there until 1952. The following year he moved to Llanidloes where he had met his future wife, Joyce Elizabeth Jones. He spent the rest of his life there working as a decorator and sign-writer whilst raising a family of 3 children John, Paula and Sandra who provided all the material for this segment. Amongst the material were young Eddie's sketches and drawings which his parents considered were good enough to get him in to art school. 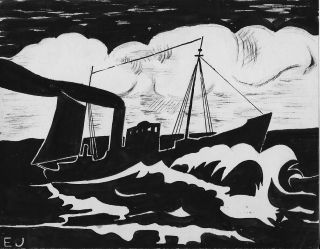