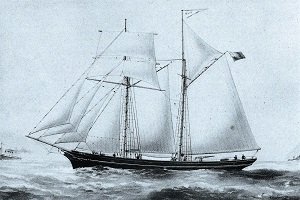 For three centuries there have been Thomas mariners at Borth. A John Thomas was commanding the sloop Bee in 1783. Thomas Thomas ran the sloops Cambria, Wonder and Success in the 1820’s. Evan Thomas 1805-77, became a captain in 1851 and commanded the schooners Lydia and Active after serving on the Cambria, Friendship, Eliza, Diligence, Robust and Nell. He married Anne James in Llanbadarn and they had ten children, one of whom, John b.1848, was mate on the Wellington and the Rheidol Queen, before becoming a master mariner. He captained the local schooner Volunteer throughout the 1860’s. When John was on the Wellington, she won a race against another local vessel,   the Hope, from Darien to Aberystwyth with a cargo of pitch pine. One of his sisters married into the notable Clayton maritime family of Aberystwyth.

Master mariner William Thomas 1770-1841, married Mary Jones 1772-1852. Their son David b.1817, became a mariner and he married Anna Maria Roberts 1816-46, a farmers daughter. Tragically Anna died twelve days after giving birth to a son William Thomas. William Thomas1846-1908, served as mate on the sailing vessels Nellie, Cassia, Janet and Mary, Eleanor, Charlotte, Helena, Messenger, Jane Herbert and the Cantheus. He gained his master’s certificate in September 1868, forty years later he drowned in the North Sea whilst serving as second mate on the steamer Kirkwall . He had married Jane Jones in 1873, the daughter of Captain John Jones and his wife Margaret. They had four children one of whom, John David Thomas 1875-1900, was lost at sea when the Ocean Belle sank with all hands off the coast of Denmark.

Other seafaring Thomas’s were Edward b.1830, who was mate on the brigantine Helen of Newport in 1861, and Thomas Thomas who was master of the 134 ton schooner Naiad of Llanelli. Another family descendant Captain David Thomas b.1870, of London Cottage was for a time in the Orient where he often met up with Captain John Davies of Maesteg House. Captain Thomas was employed by a company in Australia when World War 1 broke out. He took command of the S.S. Kinross, bound for the U.K. As he approached British waters in May of 1917, a German submarine ordered them to the boats and sank their vessel. He and his crew landed safely at St Ives, Cornwall. Captain Thomas went on to command the S.S. Seistan from 1921-24, and in the 1930’s he was master of the S.S. New Mathilde.