Archibald was the son of David and Elizabeth Rees of Gloucester House. He was born at Borth in 1857 and died there in 1938. He married Sarah Addice Brown 1861-1929 of Ludlow at Aberystwyth in 1886.

They had seven children, Archibald Percy John 1886-1906, Elizabeth Beatrice 1888-95, Mary Addice 1892-1966 who spent her whole life at Neptune House Borth, David Cyril b.1893, Albert Edwin born in Ludlow in 1898 who served in the Royal Flying Corps in World War One, Violet Olive 1901-65 and Sybil Dawlish 1901-1904. Sarah gave birth to some of these children at her parents home in Ludlow whilst the others were born at Borth. Of the children only Archibald Percy John became a mariner. He was an ordinary seaman on the S.S. Cheltonian whose master was Borth's John O Enos; also on this vessel was Borth crewman William Jones. Whilst docked at Poti Georgia Archibald Percy fell from the mast and was killed instantly at just twenty years of age. 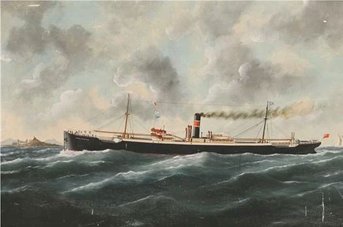 Archibald Morgan Rees' career began in 1871 at the age of fourteen as an apprentice. His first voyage was on the barque T&J as an ordinary seaman under the watchful eye of his father David Rees who captained this vessel for many years. Archibald served some of his apprenticeship on the barques Charles Jackson, Diana and the Ocean Home.

Archibald served as an able seaman on the barques Falcon, Brighton and Kiltearn. In 1879 he was awarded his second mates certificate at Liverpool and served in that capacity on the steamers Framlington Court, California and the Bernard. Records note that he was discharged when the Kelvinside was lost on the coast of Mauritius in 1887. 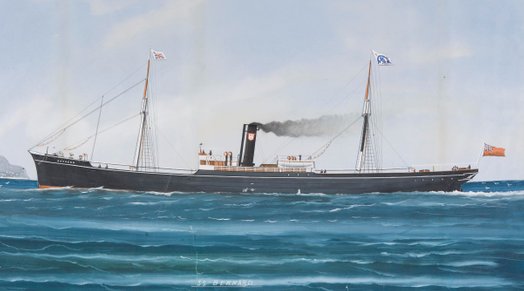 Researcher John Ellis believes that despite nominating himself as a master mariner in the 1911 census, Archibald as far as we know only reached the rank of second mate. This is validated by the fact that after being torpedoed on the Bernard in 1917 he applied for a replacement second mates certificate when he was sixty years old. Archibald and Sarah lived at 2 Maglona Place from 1891 to 1904, Clifton House in 1911 and 3 Wesleyan Place from 1917 – 1929.

In 1907 Archibald along with Evan Davies of Mona House and William Williams were awarded a Royal Lifeboat Institution Vellum Certificate signed by the Prince of Wales and a guinea each for rescuing Captain Thomas Davies Nathaniel House, his son John and nephew William John Davies. The latter was staying with his relatives at Borth to recover from an illness but he unfortunately drowned in this incident. This was incredibly distressing for his widowed mother who lived at Dinorwic North Wales, as she assumed he was safely convalescing. Both Sarah and Archibald are interred at St Matthews Churchyard Borth.

Thanks to John Ellis for much of this research.