The Bywater' connection with Borth began when Thomas Bywater 1841-97, a train driver from Abermule Montgomeryshire, married Jane Lewis 1833-97, of Borth in 1863. Jane Lewis had been previously married to mariner John Lewis who died at sea around 1860. Jane's maiden surname was Williams and her siblings included Evan, Henry, Levi, Richard and Margaret. All the boys became mariners and were part of the Williams clan of Francon House and the Matthews family of Leronia House, all profiled elsewhere in this website. Jane's grandfather Evan Williams b.1801 was also a mariner. When Jane married Thomas Bywater she was 8 years older than him. The Bywater's had 6 children, Evan 1863-1932, William 1865-1907, Margaret b.1867, Thomas 1870-95, Mary Jane b 1871 and Levi 1875-80.

Evan b.1863 married Hannah Jones of Tremadoc Caernarvonshire in 1896 at Bootle Lancashire and they had 5 children; the eldest Tom was born in Tremadoc and the rest all born in Bootle. Evan's life at sea began at 18 years of age on the schooner Picton where the census of 1881 notes her as being off the Dogger Bank en route to the river Tyne. A year later he was on the S.S. Arizona, a passenger liner regularly sailing between Liverpool and New York. His next three vessels on which he served as ordinary seaman were the steamers Rosalind, Roman and Ottoman; again transatlantic passenger liners based in Liverpool. From 1896 onwards he was bosun on the liners Ottoman, Canadian, Haverford and the Pittsburg. The last two vessels had Captain Jones of Borth in command, so we may assume the traditional Borth connections were in play. Evan Bywater died at West Derby Lancashire in 1932. None of his sons went to sea. 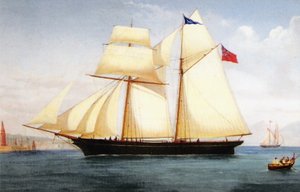 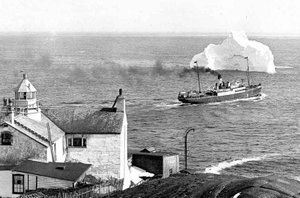 Thomas Bywater b.1870 also started his seafaring career on the schooner Picton at 14 years of age. By the time he was 21 he had served on the barques Rose Hill and the May Hulse and the brig Ocean Belle; all vessels with Borth connections. Thomas still an ordinary seaman moved to steamships voyaging on the Ruben and the Lassell. His next vessel was the barque Chilena, under the command of Edwin Hughes of Aberystwyth, on which he served as second mate and in the following year, 1894, was awarded his Mates certificate at Liverpool. Thomas' next and last voyage was as second mate on the barque Carnegie sailing from Liverpool to Australia. Unfortunately he became ill with kidney disease and died in May 1895 in the South Atlantic at 25 years of age. One can only wonder that if he had lived he would surely have become a Master Mariner. 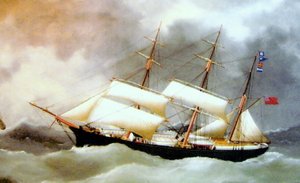 William Bywater b.1865 began his maritime career at 15 years of age on the brigs Ocean Belle,Ellen Greaves, the schooner Pilgrim and the barques Snowdon, Hawarden Castle, Rose Hill and the Glendovey, all with Borth links. In 1888 William was awarded his Second Mates certificate at Liverpool and served in that position on the barque Glendovey and then the steamer Nieto in 1890. A year later he passed his Masters exam at Liverpool. He was now 32 years old and heading for a distinguished career but fate intervened proving the hazardous nature of seafaring. In 1907 when acting as Second Mate on the S.S. Gatesgarth he and all the crew lost their lives. This vessel had left Liverpool for the short voyage to Penarth South Wales carrying a dangerous cargo of gas coal. After being seen rounding Bardsey Island she simply vanished and it was presumed that the cargo had exploded with the loss of the ship and the crew of 23. The only evidence was wreckage and a lifebelt marked Gatesgarth strewn along the beaches surrounding Porthmadoc. 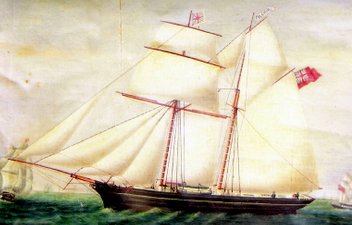 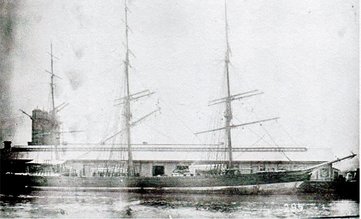 Mary Jane Bywater was born in 1871 in Bontddu Merionethshire but lived most of her life in Borth and married 2 of its mariners. Her first husband was Master Mariner David Hughes 1865-1903 who is profiled in the Hughes Mariners segment of this website. Mary Jane bore him 2 daughters Jane Lilian b.1899 and Gesina Margherita b.1902.  The latter married painter and decorator Percy William Pitkin at Borth in 1926 and moved to the London area. David Hughes drowned in 1903 whilst in command of the S.S. Mexican. In 1905 Mary married Hugh James who had been born at sea in 1880. His parents were Captain Hugh James and his wife Maggie who gave birth to him 5 days out of Rangoon. Hugh and Mary had 4 children together, Thomas Reginald 1907-23, Martha b.1909, Ebenezer 1910-12 and Margaret Novello b.1912. Mary Jane had 6 children to care for. Hugh was intermittently at sea or spending time ashore running the grocery store Manchester House. Currently we have no ships for Hugh except the one he died on. He was bosun on the S.S. Penvean on a voyage in ballast from Barrow to Barry when without warning she was sunk by German u.boat U-105 15 miles north-west of South Stack Rock, Holyhead. Hugh and 2 Borth shipmates, Morgan Morgans Gogerddan Gardens, Ynyslas, and a relative of mine, Basil Lougher Davies, Gloucester House, were among the 21 men lost that day in 1918

Tragedy was to strike again when Hugh and Mary Jane's eldest son Thomas Reginald, died after only 2 years at sea. He was on the S.S. Beechpark for the duration of his short career and whilst she was docked at Glasgow he fell into the hold and fractured his skull. Despite being rushed to the infirmary he died there without regaining consciousness. Reginald's body was escorted to the railway station by 16 Borth mariners to be sent home on his last journey. Many of these men were on Park Line vessels at the port. There was a collection amongst them that raised 32 pounds to send to his widowed mother. At Borth almost 200 villagers were at the station to await the arrival of this young mariner's remains. 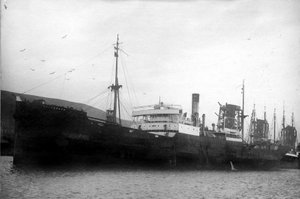 The majority of the Bywater story has been provided by descendant John Ellis of Aberarth.