Captain D.H. Richards was born on 9th June 1879 to Thomas Richards mariner and his wife Catherine, nee Hughes who lived at Sandon Villa Upper Borth. There were to be two more children Margaretta b.1882 and John b.1881. Margaretta is presumed to have died at a young age. John is also proving elusive, although a John Richards of Borth is listed at Tredegar in the 1911 census living with a Kinsey family. This family moved to live at Holmleigh (then to London Place)  Borth in the 1920's. Mrs Kinsey was formerly Margaretta Davies, a relative of murder victim Mary Davies, which  involved the Richards family. One of the Kinsey's sons, John Ivor, was a wireless operator in the Merchant Navy when he lost his life with the sinking of the S.S. Dalblair in 1940. This ship had been a part of Atlantic Convoy 0A204. John Ivor is commemorated on his grandmother's headstone as well as the Borth War Memorial. 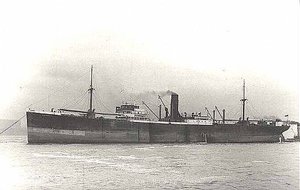 David's childhood was uneventful up to the age of fourteen when a bombshell struck. His father, Thomas Richards 1852-94, murdered his wife's sister Mary Davies, nee Hughes, at today's Nerella Cottage. Mary and Catherine were the daughters of mariner David Hughes and Llanon girl Mary Davies. The sisters uncle was Morgan Hughes, one of the districts last lime-burners who supervised the activities around the five lime kilns that stood on Borth's southern foreshore up until 1865 when the arrival of the railway heralded the end of local lime processing.

Nerella Cottage had been left to the two Hughes sisters which caused bad blood between them as Mary and her husband, who occupied the premises had no children, whilst Catherine had three and was renting elsewhere in Borth. This situation seemed unfair to Catherine and was obviously a festering issue. It is probable that Thomas, her husband, was driven to desperation by all this so he attempted to steal some documents and money whilst Mary slept. Unfortunately during the burglary she woke up and Thomas  attempted to smother her into unconsciousness, but being an asthmatic it resulted in her death

The murder is well documented in online newspapers held at the National Library of Wales. This material also demonstrates the intertwining of many nautical families at Borth. Mary and Catherine's aunt Ann Rees nee Hughes, was the widow of Captain Rees of the schooner Acorn. Another aunt, Margaret Hughes, was the widow of Captain John Hughes of the schooner Wave whose daughter Margaret was already the widow of John Davies mariner and the first to find the body of her cousin Mary. The murdered Mary's husband was at sea on the S.S. Electra at the time of the incident so knew nothing of the tragedy until he got home.

In the days before the execution of Thomas Richards at Carmarthen Goal his wife Catherine and young son David were the only ones allowed to see him. Thomas' own father, John b.1821, and other family members had refused to visit him. It was reported that young David was heartbroken at this last meeting as he obviously loved his father dearly. Amongst the heart rending farewells David's father begged him not to go to sea. History proved otherwise as undaunted young David forged a distinguished maritime career; despite having to deal with the memories of these disturbing events at a tender age... he refused to let them hinder his progress in life.

David married Jane Elizabeth Jones 1881-1958, and the family lived at Eversleigh Morfa Borth. Young David had moved a lot as a child living at Sandon Terrace, 5 London Place, 6 Brynowen Terrace and 1, London Place.  Jane's sister was Edith Bevan nee Jones whom I remember running a little shop in the village. David's seafaring career began in 1894 and up until 1902 he served on the steamers Glanayron, Nant Francon, North Cambria, Lokoja, Knight Errant, Raphael, Sandsenda and the Herschel. Most of these vessels were based either in Liverpool or London. David served one year 1897-08, on the large sailing vessel the Riversdale. 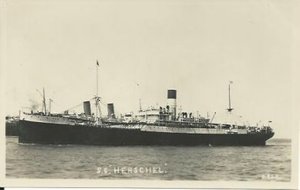 In 1901 he was serving as Second Mate on the S.S. Herschel when he had a narrow escape when this vessel was run down at 0300 hrs in thick fog by the S.S. Ardeola. The Herschel had anchored in the Crosby Channel to wait for the fog to disperse so as to enter Liverpool with her cargo of copper ore destined for Manchester. The Ardeola was outward bound for Las Palmas and almost as soon as she struck the  Herschel another vessel the S.S. Daisy collided with her; so it was now a three ship accident. This was compounded 10 days later when the S.S. Bay Fisher struck the wreck of the Herschel and sank. David and his shipmates were picked up by the S.S. Lady Alice Kentis having lost all their possessions . Happily in all these accidents no-one lost their lives.

David gained his First Mates certificate in 1903 and  passed his Masters exam in 1905 and went on to command the steamers, Wellpark, Mountpark, Dawnpark, Holmpark and the Rowanpark throughout the First World War and the Great Depression. During the Second World War his long seafaring career came to an untimely end when he fell from a ladder whilst serving as Second Mate on the M.V. Grainton when she was docked at Brooklyn Harbour New York. His injuries were so severe that he suffered a heart attack and was pronounced dead upon arrival at Long Island Hospital. David is buried in the seaman's plot at the Evergreens Cemetery, Brooklyn New York (Memorial I.D...142974707). Another son of Borth interred thousands of miles from home like his own cousin, ships engineer John Thomas Richards who lies in the Far East. Little did David know that he would be for ever a resident of America. 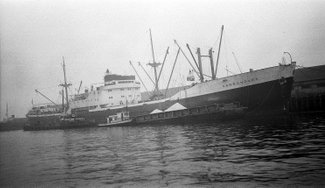 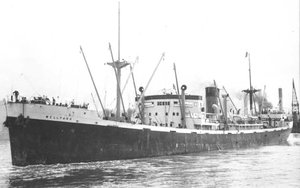 David and Jane's son David Daniel Jenkyn Richards, 1921-46, served in the R.A.F. during World War 2 but contracted T.B. and was sent home to Borth to convalesce. Unfortunately he did not recover and died in May 1946. His two sons, Desmond Jenkyn Richards and David Glen Richards went with their mother, Andrea Jeanne to live at her former home in Scotland. The boys holidayed at Borth in summer up until the 1960's at their Great Grandmother Jane's home. After her death there were sporadic visits to her sister Edith Bevan that ceased after her demise. Both Captain D. H. Richards and his son D. D. J. Richards are commemorated on Borth Memorial 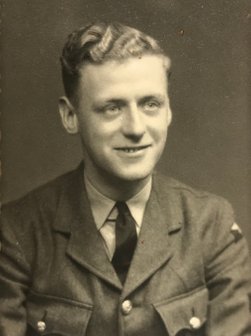 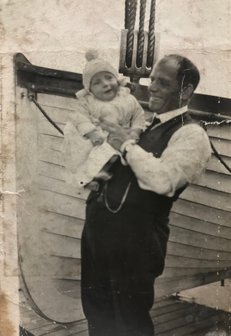 Having a lifetime association with a branch of this Richards family I was in my 20's before I learned of the murder episode. Ted and Jac Richards related just the bare bones of the story. No-one in the village to my recollection mentioned it. Perhaps with so many inter related families involved the old Borth sense of community closed ranks. It was hushed and forgotten like the incoming tide washing over the footprint of events obliterating what had been before. All those closely affected got on with their lives; no more so than Captain David Hughes Richards.

Many thanks to Scott Richards in Scotland who is a direct descendant of Captain D. H. Richards and John Ellis of Aberarth for providing an account of his early career.