David went to sea at 14 years of age in 1839 and qualified eventually as master mariner and became the managing owner of the barque Drusus. His apprenticeship was served on the Aberystwyth schooner Reform captained by John Edwards 1812-57 of Taicanol Borth. Five years later he is mate on another Aberystwyth vessel the Frances. David's next three vessels were registered elsewhere, the Sylph of Antigua, British Lion of Quebec and the Agnes Anderson also of Quebec. 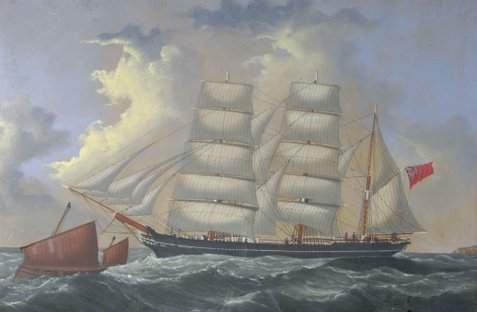 David's first command after gaining his masters certificate at Liverpool in 1854 was the Gloucester registered barque the      T & J, and he remained in that post for ten years from 1864 to 1874. This was probably the time when his home in Borth was named Gloucester House. There is one black mark in his career as in 1874 he lost his certificate for 6 months after being found guilty of a “gross act of drunkenness” on a voyage from Cardiff to Cape Verde and Mexico whilst in command of the T&J. It was reinstated in August of 1874.

The next two vessels he commanded were the C.W. Bramham and the Ocean Home. In 1879 he became the owner of the barque Drusus. His career as master spanned thirty years ending in 1881 when David died in Hoxton London and the Drusus' ownership was transferred to his widow Elizabeth. His body was bought back to Borth and he was interred at Llandre Churchyard.

The Drusus was a 390 ton barque with an elliptical stern and male figurehead. Drusus was the family name of the Caesar's. The vessel was built in 1857 at Sunderland and initially registered at Newcastle and then registered at Aberystwyth in 1879... her official number was 20253. When Elizabeth took over ownership she mortgaged the vessel for 280 pounds. Her joint mortgagees were Margaret Thomas, wife of John Thomas farmer of Tanyrallt and Ann Davies wife of Hugh Davies of Talybont, thus 3 local women now owned this vessel.

Sadly two years later the vessel was sold at Rosario Argentina by order of a federal judge to satisfy the claims of the creditors...as per letter from the Vice Consul. The certificate of registry was cancelled in November 1883. One wonders if prejudice came in to play as having three women owners may have hastened the creditors to instigate this action. At least we have a magnificent painting of this vessel which is in private hands locally and I used it on the cover of my book Borth a Seaborn Village.

Thanks to Hugh and Verona Hughes for images and John Ellis for extra details of Captain D. Rees' career.