John King b.1874 was the grandson of Master Mariner John Hughes 1822-1908.  Captain Hughes and his wife Anne 1823-92, had four daughters, May b.1852, Ann b.1858, Sarah b.1860 and Lizzie b.1869. Sarah married Captain John Jones b.1862 and their son Horace Ivor b.1895 also became a Master Mariner. Lizzie married Captain Thomas Lewis Williams and their son Llewelyn Vernon served as First Officer. May married Charles King, a shoemaker from Rhos, Montgomeryshire and had two children, John b.1876 and Hannah b.1878.

At the tender age of 15 John went on his first voyage in 1891 on the Aberystwyth owned brig Crusader, commanded by his uncle Thomas Williams of Ocean Wave House. It was to be an epic and harrowing introduction to seafaring for young John King. The Crusader had picked up a cargo of slates from Porthmadoc bound for Hamburg Germany. The weather became foul as they approached Lands End and a fierce blizzard sprang up on the 9th March, 68 miles off The Lizard. The vessel got into difficulties as water filled the cargo hold and eventually the Crusader had to be abandoned in a sinking condition. All seven of the crew took to a small boat and one crew member A.B. Thomas Owen of Caernarvon died of exposure hours later in the freezing wet conditions. The boat was so small that the crew had to throw all provisions and extraneous clothing overboard to keep afloat during the storm. 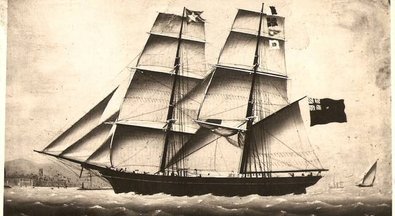 Luckily the Brixham trawler Gratitude, captained by Albert Gempton, which had weathered the same storm, spotted them 35 miles south of the Longships Lighthouse. The crew were landed at Falmouth and after a few days recuperating travelled back to their homes in Wales. Young John King had witnessed a severe storm, a sinking ship, days in a small boat with a dead crew member, which must have left an indelible mark on him.

It is only later that we catch up with him in 1911. By then he had married Elizabeth Williams of Treddol in 1900, and they were  living in Barry South Wales with their three young daughters, May Anne b.1900, Olive Mary b.1903 and Gwyneth b.1908. Also living with them in 1911 is John Williams, Elizabeth's brother who is listed as a 28 year old mariner. On the census of that year John King is listed as a ships rigger, a shore based occupation. As yet we cannot find any records of John seafaring between 1891 and 1908. Perhaps he had forsaken seafaring after his epic first voyage on the Crusader. His sister Hannah stayed on in Borth and is listed as the owner of a boarding house Rhyd Y Cerrig.

1891 seems to have been a hazardous year for Borth mariners as Captain John Jones of the schooner Resolute's story attests to with the discovery of a message in a bottle. The incident was reported  in the Cambrian News and Merionethshire Standard, of 11th Sept 1891. This was especially poignant for John Ellis, a researcher and compiler of the prominent Borth maritime family, the James's of whom he is descended. One of his ancestors was Captain John Jones of Resolute House Borth. The newspaper article is as follows:

A Message From the Sea – on Wednesday a bottle was picked up between the castle and the harbour (Aberystwyth) by Miss Phillips, Llanelli, who is staying at Beach House, Terrace Road. She broke the bottle and found it to contain the following news:

Schooner the Resolute of Borth, Port of Aberystwyth Wales, 16 miles west of the Isle of Wight, great snow storm, vessel stretched timbers and in sinking condition, no chance of escape from drowning. Goodbye. Mate. If found please communicate with friends of captain and crew. Am afraid the Hope is done by the way she is tossed about. She has lost her main topmast and sails. Progress has kept ahead and we have lost sight of her. Goodbye vessel nearly gone

In conclusion the newspaper states that the paper and piece of bottle were in the possession of Mr Watkins, Cambrian Place. It is to be noted that the captain's younger son John James was part of the crew and perished alongside his father and other Borth crew members.

The latter incident again demonstrates the perilous nature of seafaring. Both the other vessels mentioned in the message survived that particular storm but were later lost as the Aberystwyth Port Books reveal. That the bottle should end up being retrieved in the home port of the Resolute is remarkable, if not miraculous.