John Seaborn Evans 1822-62, has intrigued me for years because of his unusual and romantic middle name. So much so that the title of my first book about Borth was called Borth a Seaborn Village.

As there was little information initially I could not give him and his family a profile. However a letter out of the blue from his descendant Eileen Nicholls of London shone a little more light on him and his eldest son. Added to this is John Ellis' recent researches into Captain David Rees of Gloucester House's family that revealed a link with John Seaborn. The latter's father was John Evans of Aberystwyth b.1782, a mariner or possibly a carpenter who was lodging at Borth and married the host family's daughter. John Evans was nearly forty when he fathered John Seaborn who was probably born prematurely on a voyage home on his mother's family's sloop. It was possibly carrying a cargo of limestone to be burnt in one of the five kilns that stood on the Borth foreshore between today's lifeboat station and Glan yr Aig. Women often crewed family owned coastal sloops in the first half of the 19th century.

John Seaborn married Anne Morgans in 1843; she was the daughter of mariner John Morgan and his wife Ann. John Seaborn's wife was born at Bancwernfach near Tyn yr Helyg in 1822. Her sister Elizabeth was married to master mariner David Rees of Gloucester House who owned and ran the barque Drusus. 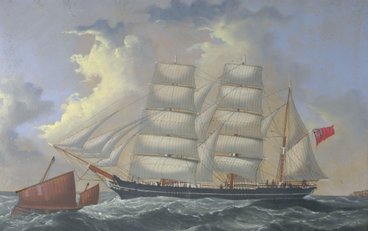 Information is scant but we know that John Seaborn and Ann had five children, all born in Borth. They were John b.1844, Elizabeth b.1846, Amelia b.1850, Ann b.1852 and David b.1854.  Both Amelia and Ann married slate quarrymen and went to live in Mallwyd.

The eldest son John 1844-71, had left Borth and was sailing out of London at the age of nineteen. He met and married Sarah Keyes of Middlesex in 1865 and never returned to Borth despite his mother exhorting him to do so in a letter she wrote to him in 1867, by which time she was a widow. This indicates that his father John Seaborn had probably drowned. The letter, kindly provided by John Seaborn's great great granddaughter Eileen Nicholls, mentions that there were plenty of berths on local vessels at Aberdyfi and Aberystwyth and that wages were very good at the time. Also mentioned were two of John Seaborn's uncles, David Reece serving on the Thomas and Jane and Thomas Evans on the Nanteos.

Eileen further expanded on John the eldest son of John Seaborn's career by stating that he sailed to Gibraltar, St Petersberg and made several voyages to New York. Sadly the dates indicate that he died before he was thirty years of age and his father had died around forty years of age....both father and son had short lives.

Of John Seaborn and Ann's other children all we know is that Amelia and Ann married quarrymen and went to live at Mallwyd. Of Elizabeth and David we know nothing at the moment. What was found in the Llandre Church baptismal records was that John Seaborn's widow Ann had an illegitimate daughter called Maria in 1864 two years after her husbands death.

Thanks to John Ellis for the links to Captain David Rees and his wife Elizabeth. Also thanks to Eileen Nicholls for documents and information on her Borth ancestors.