Of the cartographic records of the Borth area and beyond, John Speed’s map of 1610 mainly denotes churches and manor houses, and overlooks scattered peasant farms. It does not mark Borth by name, but it is interesting to note that the river Leri exits well to the south. It is either a stylistic embellishment, or could support a long-held belief that the Leri once flowed into the sea near the present day lifeboat station. Folklore insisted that over the centuries the prevailing wind and tide flow from the south west had pushed the sand and shingle bank northwards and with it the river’s exit. This supposition has recently proven to be correct. Surveys of the beach from Trwyn Cyntaf to Ynyslas indicate that the Leri’s sea exit has moved north from a position opposite today’s lifeboat shed to its final exit before closure, opposite Aberleri. There are stretches of peat and clay interspersed by alluvial deposits from a waterway entering the sea at intervals all along the beach (R. A. Yates, pers. comm. 2003). 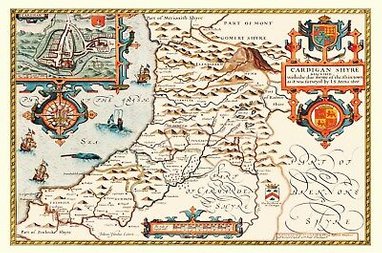 Johann Jannsen’s map of the area, produced in 1650, intriguingly marks the now vanished Capel Cynfelin, spelt Kilvellen, that stood near Clarach and was sited somewhere between the present day Wallog Mansion and Glanmor Farm. This was a religious building or settlement and is marked as such on maps dating from 1542 (Christopher Saxton) up until 1809 (John Roper). It has been suggested by Mr Alexander Jones, long time resident of Clarach, that it may very well have been a resting house, as Porthangel and Ty’r Abi were in the Cwymcynfelin area. These were places that the monks of Strata Florida Abbey stayed at on their travels northwards to the Dyfi ferry (S. Jones, pers. comm. 2003). The abbey had been given land in the Llanfihangel Genau’r Glyn area, namely Doferchen, later Tirmynach (Abbey Land). Mr Jones further conjectured that the building could have been in an area which has suffered severe erosion even in his lifetime. This is a possibility as a Saint Mary’s chapel recorded in Elizabethan times at Aberystwyth was washed away in a violent storm in the 1600s. Perhaps the site of Capel Cynfelin was on Tol Faer, Mary's Mound, and that it was this building near Aberystwyth that was swept away in that storm five centuries ago. Perhaps from there travellers walked under the cliff and along the beach to the Dyfi ferry, a far easier and quicker journey, tide permitting, than over the undulating coastal clifftop land route.

Lewis Morris’s map of the area, made during his 1748 maritime survey Plan of Harbours, Bars, Bays and Roads in St Georges Channel, unfortunately excludes the Wallog to Borth strip. Many other coastal areas were not recorded, as he was mainly concerned with havens, anchorages and navigational features, especially hazards such as sandbars and causeways. The term ‘barred havens’ in various texts means anchorages in river-mouths "guarded" by sandbars. However the exit of the Leri is included in his chart which concentrates on the navigational features of the Dyfi estuary. That exit was opposite the present day farm/holiday resort of Aberleri. This little harbour mouth of the Leri is mentioned in Llanfihangel church records of 1373 where they state that:

… ye customary tythe of herrings and of other fish from 4 fishing botes belonging and moring in Borth and Aberleri (Bygones, 1867-8, p. 28).

Does this mean that four boats belonging to Borth moored at Aberleri, or that some were at Borth and others at the Leri mouth? Today's Aberleri farm on old Ordnance Survey maps is marked as Lower Aberleri farm, whilst a smallholding that existed somewhere near today’s Borth Railway Station was called Upper Aberleri. This could have been the place that was the temporary station during the construction of the railway line to Borth and beyond in the 1860s. The land between the upper and lower Aberleri farm would therefore be referred to in the old days as Aberleri. At one time the river’s exit was possibly where the Lon Goed stream met the Leri as seen in Singer’s 1803 map. Today one can still clearly see the old river route as a 'rush bed' meandering through the present day golf course, especially on the north side of the house known as Glan Gors.

Borth is mentioned in the text of Lewis Morris’ survey in connection with the thriving herring fishery of the early 18th century where he notes:

… ‘here (Aberdyfi) and at Borth they have some years a good herring fishery, and of other fish a plenty’.

In his 1748 survey he was punctilious in using the local Welsh toponyms for coastal and marine features. Even though on occasion he knew how to curry favour with the English when he wanted something to his advantage, he was more often sarcastic towards them. Morris believed that the English academic establishment should, in writing about another country’s history, be well versed in its language. This belief he used in his withering attacks on feeble attempts at spelling Welsh place names (Jenkins, 2002, pp.1-23).

Later surveys still resorted to convoluted Anglicised versions of place names, as in Murdoch MacKenzie’s marine chart of 1775. In this chart we have a clear view of a correctly marked Borth, but with a misspelt ‘Leary’ river exiting at Aberleri. It is interesting to note that the then rivercourse had warranted a little bridge marked near today's Aberleri farm. If there is any significance to the number of buildings included to denote a village, then Borth and Aberdyfi were the same size. Surprisingly for 1775, there are no buildings marked on Mackenzie’s chart as being part of Borth on the shingle strand; this, however may be because the space between the shoreline and the parallel course of the Leri, on this particular chart layout is too narrow to include buildings. These buildings are more about stylistic embellishment than actual house numbers as the main function of the chart is to assist mariners. Many mapmakers as well as so called travellers did not in fact visit some of the areas mapped or written of, they simply used previous accounts or records.

The physical features of the Leri river mouth and its own little bar appear on several old maps and charts such as Lewis Morris's 1748 marine survey. However there are no buildings marked and it was not mentioned in the Elizabethan surveys of 1565. I speculate that there must have surely been one or two mud or stone cottages at this location as it was after all, a well-used place. Under the last few hundred yards of the shingle bank there may be the remains of old wooden constructions that mark its ancient use as a landing place. Borth fishermen used the Leri as it was conveniently tidal up to Ynys Fergi, which it still is. What may also be considered is that prior to re-routing the Leri, the volume of water entering the river system may have been greater so it could have been tidal beyond today’s Glanleri/Brynllys bridge, making it easier for boats to get nearer the back of the village.

With all this in mind one wonders whether there was a settlement in ancient times around the Leri sea exit when it was near today's lifeboat station, or later somewhere further north as ocean drift pushed the river mouth in that direction. Perhaps these places were the now lost Porth Gwyddno. Considering that Gwyddno's name has been given to several features in the area, is it not possible that it was near today's Borth? Those who dismiss the idea of Porth Gwyddno being located somewhere near the village have yet to identify an alternative. It has been speculated that it was in south Scotland, possibly somewhere along the Clyde...but where? References to Porth Gwyddno being a major port may well have been poetic licence to aggrandise this location, as the alternative name, Hafan Gwyddno, can mean a home or haven.

At one time the Leri and other local streams were vital in providing water for domestic use. By the end of the 19th century fresh water for Morfa Borth inhabitants was solely sourced from the Leri after the Nant y Garreg stream was diverted into the sea by today’s lifeboat station. A drainage leet was dug along the back of the village to absorb the seepage from the marshland and several small streams, one of which passed through Felin Wern and another that flowed down Cwmcethin. In old deeds this leet is called the Old Mill Leet (J. Matthews, pers. comm. 2003).This was mockingly called Yr Afon Sain, the River Seine. To gather water the womenfolk would walk down the Rhyd to the river Leri and fill their jugs or pails every morning. There was consternation at Evelwen in the 1870s when one of the young daughters of John Beynon set her petticoat alight when she stood too near the peat fire. A whole days supply of water was swiftly thrown over her to prevent a serious burn. As it was towards evening propriety deemed that it was the menfolk who returned to the Leri to replenish the water (J.Richards, pers. comm. 1970). Water for the upper Borth and Gwastad area was plentiful with sources at Nant y Garreg, Nant y Wennol and the many springs in the area.