James' parents had emigrated to New Zealand where they became NZ citizens and he was born in 1964. A year later the family returned to Britain on the RMS Ruahine. The reason for this was that his father had come to do his PhD. in agricultural science at the P. B.S. Gogerddan. The family lived at Coron Wen, during which time James' sister Fiona was born. On the completion of his father's PhD. The family returned to New Zealand on the SS Northern Star. Shortly afterwards James' grandmother became unwell and they all returned to the U.K. David, his father, was a cadet aboard the ship HMS Conway (moored on the Menai Straits, Wales) 1950-1952; he then joined the Clan Line and subsequently the Union Steamship Company of New Zealand, where he served as second mate on board several ships, including TEV Maori, TEV Hinemoa, and TEV Rangatira. 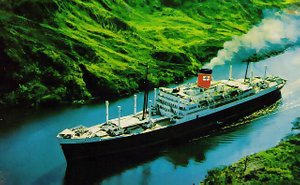 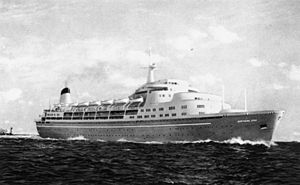 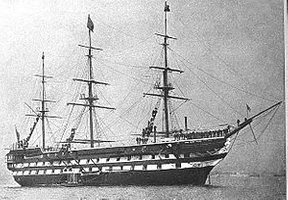 James' uncle, Captain Roy Andrew Alexander Wilson, was also a cadet on HMS Conway and had a relatively brief career which ended in tragedy. He was in port when the authorities impounded the ship as there were monies owed, which meant that no-one amongst the crew got paid and they were unable to leave the harbour (Port Harcourt, Nigeria). All that the family knew was that Captain Wilson was agitating on behalf of himself and the crew when he met a fatal accident whilst ashore. It was a relatively lawless place at the time and the general belief is that it was a set-up and he was subject of an ‘arranged accident’ when his car was run off a cliff.

With the family back in Borth James recalls that they stayed at a caravan in Sea Rivers, then in Four Winds, a bungalow along the Rhyd. He attended Borth Primary School and made lifelong friends with his contemporaries such as Hugh Hughes. After finishing secondary school at Penglais James found himself footloose, and as he says a free spirit. He worked for a while at the Nat West Bank in Cardigan and then moved to a branch at Haverfordwest but he was becoming disenchanted with life

The lure of the sea proved too much and after visiting a Royal Navy careers office in Swansea he joined HMS Raleigh, where he was awarded the Raleigh Medal for highest individual marks in basic training for his intake. He became a Weapons Engineer Mechanic (Radio) training at HMS Collingwood.

His first ship was HMS Danae, a Leander Class Frigate. They visited Gibraltar on the way to commence duties as Falkland Island Guard Ship, patrolling the waters around the Falkland Islands and South Georgia. This was after hostilities had ceased. During this time when they were off the west coast of the Falklands the Captain announced late at night “some of you may be aware that it is the Argentinian national day and we have been advised that their fleet has sailed from Buenos Aires. In the interest of self-preservation we have positioned ourselves in the middle of the Taiwanese and Japanese fishing fleet”. James went on deck and low and behold there were little lights everywhere, except on their own ship. 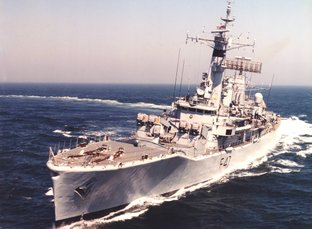 On the return journey to the U.K. the ship sailed through a force 11 gale which caused damage to the bridge superstructure, they had to put in to port for temporary repairs and on arrival in the U.K the vessel was in dry dock for some time. James was then drafted to the Flag Officer Sea Training Communications Centre (FOST Commcen) for 18 months, where he was made Acting Leading Weapons Engineer (Radio) to fill the post of Watch Systems Controller. Essentially he was watch keeping as part of the team maintaining communications systems used during NATO exercises.

His next posting was back down to the Falklands as part of Naval Party 2010. This was to support the guard ship and submarine that were patrolling the Falkland waters. The ship they were on was a leased Stenna ship, which would otherwise service oil rigs in the North Sea. After eight months he returned to the U.K. It was then, as James states, having observed a lot of old hands propping up foreign bars he had a significant moment of reflection about his future, despite not wishing to leave the sea. By now James was based in Plymouth and took the opportunity to investigate the possibility of studying architecture at the local university, recalling that his art teacher at Penglais, Hywel Harries, had earlier encouraged him to pursue a career of some sort where he could use his interest in art. He was accepted and after 3 years got his BA Honours degree in architecture. From there he gained his Masters in Architecture at Huddersfield University. By this time his parents had settled permanently in Llandre.

After working for 5 years for an architectural firm in Derby he felt competent enough to step out on his own. He went into partnership with Lionel Curtis of Cwm Einion near Furnace. They had offices in Aberystwyth, which was convenient for James as he was keeping a weather eye on his widowed father at the time. One of this partnerships projects was the conservation, repair and upgrading of Plas Nanteos. This company also designed the Nisa Store in Borth. To their credit, the minute the owners Derek and Gwenda saw the plans and model of the design they swiftly instructed that the project proceed.

James' partner to be, Friederike, a German-born doctor, wanted work done at her Borth property. Romance blossomed and since 2006 James  has lived permanently in Borth and is an active member of the community.

James' family had a long association with the sea as his great, great uncle, George William Gray ran a fleet of large sailing barques (including the Blair Gowrie and Blair Athol) whose home port was the Clyde (Glasgow). G. W. Gray had married Nora Neilson and had five children. Neither of the two sons, Andrew and James, went to sea. Due to a bank crash, G.W. Gray could not find the finances to make the transition from sail into steamers. His three daughters distinguished themselves as Nora Neilson-Gray became a well known artist, Muriel Gray lectured in English and Tina was reputed to be the first female surgeon in Scotland. 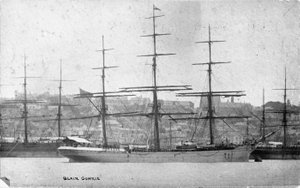